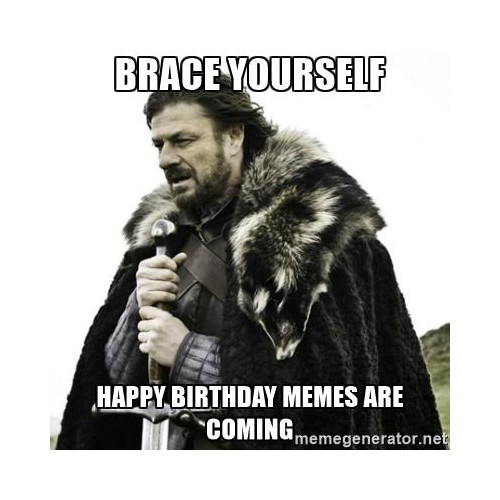 It's an event that happens every single year which is supposed to be filled with joy and laughter. It is a time where a person can reflect on where they are in life and (through social media) directly compare themselves to others who appear more successful. No, it's not New Year's Day; it is your birthday. While there are so many ways of telling your friends, family or coworkers how much they mean to you, have you ever thought of sending a happy birthday meme?

As the world becomes more digital and face-to-face conversations are swapped for emojis, a happy birthday meme feels less like an oddity and more of a sheer fire success. While a Hallmark birthday card used to be the bare minimum of a gift you could offer someone, many miss the mark when it comes to the personal connection and the message you are trying to convey.

The Anatomy of a Birthday Meme

A great place to start when discussing a happy birthday meme is its components. While there are multitudes of categories for memes, there are certain things that make a happy birthday meme recognizable. Before proceeding, it is also important to understand the history of birthdays and why people hold them in such high regard. Not to be confused by the term “birthdate," a birthday is the anniversary of the birth of a person or an institution.

​Regarding institutions, many religions celebrate the birth of their founders or religious figures on holidays like Christmas. Birthdays signify the passage of time and certain birthdays recognize a person as an adult or of legal age to partake in something. For example, in the United States, a person is legally allowed to drink at 21. Eighteen is the age where a child reaches adulthood and can act without the consent of a parental figure.

​The Anatomy of a Meme

Now that you understand birthdays and their origins, when discussing the anatomy of a happy birthday meme, there are certain things you should look for. First, the meme should have an image. Whether it is of a celebrity, scenic pasture, or a funny looking baby, there should be an attention-grabbing image.

There should also be text written on the image. If a person sends a picture with no text, then it would just be a funny picture. Could you imagine receiving a picture of a random funny looking baby on your birthday? You'd probably think your friend had issues needing immediate attention.

Regarding the text, it should be bold and one that does not clash with the image or its background. Many happy birthday memes will use the neutral color of white with a black border. White rarely clashes with anything while a black border helps to separate and distinguish the text from background images. Last, something that is not necessarily a requirement but works well is separating the phrase into two parts (one at the top and one at the bottom).

Separating the text makes it easier for people to read the meme. It also makes the image the focal point. The combination of a funny quote plus a funny or ironic image makes a happy birthday meme work. Also, make sure that the words “happy birthday” are on the image somewhere. Imagine spending hours searching for the perfect image just to forget to wish the special person in your life a happy birthday.

Beginning with a birthday card, these birthday wishes are delivered physically or as an e-card. An e-card is created using digital media instead of paper and sent to the recipient via email. While both options still work, the major downfall of a physical birthday card is that it can not be fully personalized. Most come with pre-written messages and, while you could try to cover up the message, if you make a mistake the card is damaged.

The major downfall of an e-card does not have to do with the customization of it, but with the platforms where it can be delivered. -E-cards are typically sent by email via an e-card platform, and that is (pretty much) as far as they can go. It's hard to send someone an e-card through social media or text message.

A happy birthday meme differs from a physical card because they are made online and are fully customizable. There are several programs a person can use to create a meme and it does not take a long time to find an image and quote. A birthday meme differs from an e-card because it can be saved to a computer or any device and then easily sent as a small image file via email, text, online message, or through all social media platforms. A happy birthday meme is versatile, which makes it easier to use and manipulate.

​While discussing memes can be fun, the best part about a happy birthday meme is finding one or making one for yourself. Many people new to creating memes may wonder what these memes look like. Below are 10 of the best happy birthday memes you can either re-post or use as inspiration. ​One of the most iconic shows of the 1990s was the “Fresh Prince and Bel-Air.” On the show, there was a character named Carlton, played by Alfonso Ribeiro. In one of the funniest memes out there, there is a picture of Carlton telling the recipient to “Stay Gangster.” For anyone who knows this character, he was a rule follower, so having him say those words is rather ironic.

​A Birthday Wish from the Queen

​Beyonce is the Queen of everything and deep down, everyone wishes they had a fan constantly following them around. In this animated meme, it shows Beyonce during a concert making a funny face. The message reads “happy birthday, queen.” The word queen has a crown hovering over it. This meme is perfect because Beyonce considers herself a queen and anyone that is a fan of hers subscribes to that same philosophy. ​The Avengers feature some of the best actors out there. Chris Evans, Mark Ruffalo, Robert Downey Jr., and Chris Hemsworth are so handsome that you can't look away yet so likable that they do not make you want to punch them in the face. In this meme, the text reads, “Hey. You. Happy Birthday.” It works because all four men are pointing at the camera.

​Cake is something that everyone looks forward to on their birthdays. In this animated meme, a hamster is quickly eating a piece of cake. Though no one likes to admit it that's how most people eat a cake.

​It wouldn't be a happy birthday meme countdown without a cat showing up somewhere. This meme works so well because there are four cats that look like they couldn't care less about the party. Even with those vacant expressions, they all have hats on. Two of the four are even dead asleep. ​The thing that works so well about this next meme is the quote. It reads, “You're so pretty, you make Kim Kardashian cry.” It works well because there is a picture of Kim Kardashian making her infamous crying face. It's a running joke on her reality show that her crying face is ugly.

​Is That Your Real Age? ​The next meme is another favorite as it shows a funny looking toddler. The reason this one works so well is that of the message which reads “I know your real age.” The baby looks very sinister, only adding to the effect of the message. ​Staying on the funny looking baby train a little longer, another meme that is sure to make anyone laugh is the one of a little baby holding a knife and looking upset. The message reads, “Touch my cake and I will cut you.” The expression on the baby really sells the whole killer vibe. ​This next meme allows us to revisit cats. The message reads “Happy Birthday. Just another year closer to being that Crazy Cat Lady.” The close up of a cats face brings the message to life. It is a great message to send to friends obsessed with their cats.

​The last meme is one that is always a crowd pleaser. Mr. Rogers is an enduring figure from a time when innocence was the best thing you could put on television. The thing that makes this meme work is the message which reads, “Another birthday and I don't think you look a day older! It's fun to make-believe isn't it?" This message works because the picture of Mr. Rogers is wholesome and inviting.

A good happy birthday meme is something that can make that special person in your life grin from ear to ear. As the world becomes more digital, taking the time to figure out what message you want to send is the best way to show them that you are thinking about them as they continue aging.