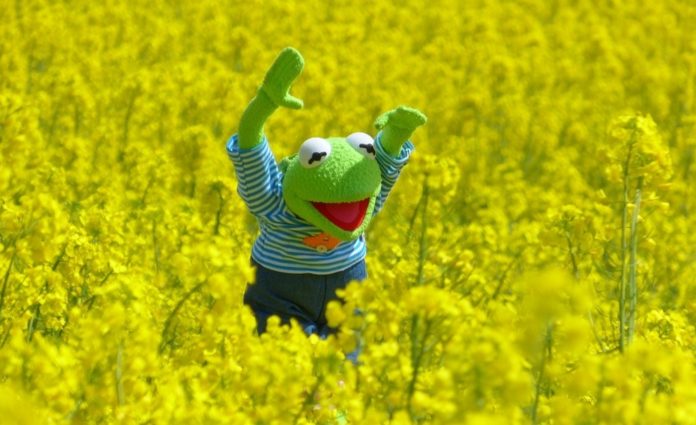 When one thinks of the iconic leading men of Hollywood, there are certain names that come to mind. From the womanizing Clark Gable to the handsome and tall American Paul Newman, these men left an indelible mark on the film industry. One leading man that has outlived them all and continues to draw intrigue is not a man but a muppet named Kermit. After over 50 years in the spotlight, the Kermit meme has revitalized this already iconic character.

Although Kermit the Frog and his longtime love, Miss Piggy, have broken up and then come back together, the staying power of the green frog is undeniable. Having starred in so many films, he has become a major fixture in the lives of the old and young. The Kermit meme is one of the most popular out there because it can be used in so many ways and seems to fit every occasion.

In this guide, you will learn what a Kermit meme is, how these memes are used, and some examples of the best memes out there. While some memes can become tiresome, the Kermit meme always seems to have the right balance of humor and irony.

Quick Navigation
What Is a Kermit Meme?
How Are These Memes Used?
5 Best Kermit Memes
Conclusion

What Is a Kermit Meme?

A meme is defined as am activity, concept, catchphrase, or piece of media which spreads throughout the internet as a mimicry or for humorous purposes. Knowing a little more about Kermit the Frog will allow you to understand the full scope of the Kermit meme.

Introduced in 1955, Kermit the frog was created by Jim Henson and has spent the majority of the years playing the straight man protagonist.

The origin of Kermit's name has been debated, as some people claim the muppet was named after Jim Henson's childhood friend Kermit Scott. Another theory is that Kermit was named after a man named Kermit Love who worked closely with Henson on the design and construction of the Muppets.

A male, green, muppet frog, Kermit's look and mannerisms have remained the same, making him one of the most recognizable symbols worldwide. Married to Miss Piggy since 1976, they have also managed to have one of the longest and most successful marriages in Hollywood.

Originally voiced by Henson, the role was taken over by Steve Whitmire in 1990, who remained the voice until 2016. In a still hotly contested changing of the guard, Whitmire was let go of his contract and Matt Vogel was assigned the mammoth duty of voicing Kermit. Known for his odd speaking style, Kermit the Frog has also made waves in the music industry, as he has released two hit singles; in 1970 titled Being Green and the second in 1979 called The Rainbow Connection. The Rainbow Connection reached number 25 on the Billboard Hot 100 and is frequently covered by the most prominent artists of today.

With all of that information, a Kermit meme is a funny or ironic image which features the iconic green frog. The added commentary placed on top of the Kermit image draws attention to some aspect of Kermit or makes a social commentary. The Kermit meme began surfacing around the year 2014, and after the first one became viral, people have looked to the green frog as a way to express humor, disappointment, anger, or purely to say something ironic.

How Are These Memes Used?

While a great question, it is one that takes a little deeper investigation to understand how the memes were created to begin with. One of the reasons Kermit the Frog is one of the most memed characters on the internet is because his expression doesn't change. He also never gets older and has been in so many movies, tv shows and specials, that people can easily take snapshots of him and create memes which match the mood they are in at the moment.

While Kermit's general appearance has remained the same, animators and fans of the green frog have made changes. For example, there are memes and images featuring Kermit as a baby frog and even some having Kermit with hair and a mustache.

The Kermit meme is most often used to express sarcasm or to comment other people in a playful way.

The reason these memes work so well is that the sarcastic comments are placed in the realm of Kermit the Frog, and, for those who know the character, he would never say those things in real life. If Kermit were a sarcastic character, the memes would not be as popular because people already would expect that type of language from that character.

While it is fun to learn more about the origins of such an iconic character, the best way to understand the Kermit meme is to see it in action. Below is a list of the 5 best Kermit memes out there.

To begin this list, one of the first Kermit memes that went viral was the Evil Kermit. Evil Kermit? Yes, that's right. This meme was gifted to the public eye in 2014 after the release of Muppets Most Wanted. In this film, an Evil Kermit (named Constantine) appears and acts as Kermit's doppelganger. In the film, the Evil Kermit represents humans as constantly grappling with making the good verses the wrong (and often fun) decision. He is essentially a physical manifestation of human desire to want to do things without thinking of the consequences.

This meme became a major hit after an image of the Evil Kermit surfaced with him wearing a dark robe which covered his eyes. People began using this meme to air their frustrations. One user even stated that she wished to rob a cat and used this meme to talk about it. Others used this meme to illustrate how they felt after a break up. This meme is still used quite often and never ceases to make others laugh.

Don't Hide It All Inside

Apart from the Evil Kermit, Sad Kermit has also become a favorite meme amongst the masses. There is an image of Kermit sitting down on what looks like a bed with his legs to his knees while staring down at the ground. This image became a physical manifestation of how many people felt after a break up, if they failed a test, bombed a job interview, didn't get the house they wanted to, or became overwhelmed with bills.

The Sad Kermit then expanded to having Kermit staring at his own reflection, laying down in a bed with the covers almost covering up his whole body, and one where he's at a desk contemplating life. Every human has at some point been in those same positions the feeling became all too relatable. The Sad Kermit continues to help people feel as though they are not alone, even when they are still in need of a pint of ice cream.

A video of a Kermit doll spinning in a tub of water became another viral meme after originally being posted on Facebook. This meme became an instant hit because the spinning Kermit was another physical manifestation of what many felt on the inside. While not recommended, many people have become so drunk that their life and the day after becomes a constantly moving roller coaster.

This meme could also represent your life without alcohol. For example, a person used this meme to talk about how they felt after a long week of work. Everyone can relate to the feeling of not knowing which way is up or down and this meme is the best representation of that.

The next Kermit meme is for those who have an adult sense of humor. The meme is of a Kermit bent over on top of a bed while the area that a puppeteer's hand goes up facing the camera.

Originally an expression of lust, this meme has now become a staple for anyone that becomes incredibly excited about something. For example, when a new song by Taylor Swift was released, this meme was used to express the amount of excitement that some people felt for it. When you feel an overwhelming sense of excitement, this is the perfect meme to use.

The last Kermit is one that always brings a smile to even the crabbiest of people. Featuring a young Kermit with a shovel, this Kermit is used for anyone who is looking to recapture their youth.

This Kermit is from the Muppet Babies incarnation and became an instant hit. Its incredible enthusiasm radiated off the page and it works as a way to make people laugh.

As one can see, Kermit the Frog is an iconic muppet. Over 50 years in the public eye he has managed to remain relevant. Thanks to memes, people are finding new ways to use the Kermit and it doesn't seem like that trend will stop anytime soon.