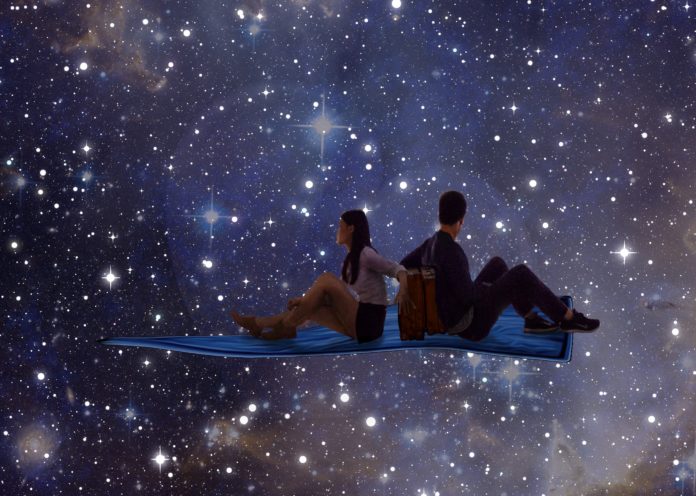 Have you ever heard the phrase "opposites attract?" Many people believe that the best relationships are the exciting, passionate ones in which two people with very different characters and ideas of the world fall in love.

This can seem very romantic, but as many people have experienced in their own lives, relationships built on the enthrallment of differences often either fizzle out after the honeymoon phase or crash and burn as a result of disagreements.

The science of astrology says that the most effective way to find a meaningful, loving and healthy relationship is to research the best horoscope for your own sign.

Many romantics are in search of "the one," a true love with whom they are destined to be with.

This valiant search can be conducted in many ways; through dating sites, mutual friends, and even through researching the astrology of love.

Those who believe that astrology may have the answers believe that there are forces such as destiny and the alignment of the stars that are unseeable to the naked eye and unexplainable through traditional science and rationale.

If you are open to the possibility that your horoscope may have more meaning than a fun weekly column in the newspaper, it may be time for you to look into relationship astrology.

The most important aspect of a successful relationship is compatibility, which is when two people have personalities and communication styles that complement each other.

Compatible people are able to reach a deep understanding of each other, because they often have similar ways to understand the world around them and are able to communicate their innermost experiences to each other.

They are also typically better at resolving conflicts and making decisions in a fair, respectable way.Two people can be compatible in many different ways, but one of the most crucial ways is their astrological signs.

Each astrological sign has a best horoscope for it, one that blends most naturally and results in a happy, successful relationship. Searching for the best horoscope sign to match your own is essential in avoiding heartbreak, conflict and mistakes in your love life.

In order to give you a full understanding of this delicate science, here is a list of the astrological signs that best match each other.

These combinations have been thoroughly researched by astrologists, and each one reflects relationships in which partners understand and respect each other's needs.

People can certainly have successful relationships with signs that are not listed as most compatible to their own, but there may be difficulties as a result of different needs and love languages.

If you have a history of unsuccessful relationships, it might be worthwhile to look into the best horoscope sign to match your own, as doing so can help you to avoid many relationship problems.

To have a long-lasting, healthy relationship, you need compatibility and respect along with love for your partner.

In synastry, otherwise known as relationship astrology, the birth charts of two people are studied in conjunction with one another.

By studying the interaction between two birth charts, one can accurately determine how compatible the two people will be in a romantic relationship.

However, it is essential to have a complete knowledge of synastry before determining this, as you need to take into account multiple factors.

Having an understanding of birth chart reading is crucial as well, because many of the same techniques used in this science are also part of synastry.

A common mistake when beginning to use relationship astrology is focusing solely on the sun sign, ignoring other significant aspects of one's astrological sign.

Along with the sun sign, it is important to take into account the position of the moon sign, rising sign and eight planets, as each plan signifies a different area of one's life and must be studied when determining compatibility between partners.

In synastry, one compares two charts and studies the strengths and weaknesses that would likely occur in a relationship.

This is an excellent way to better understand the problems one might be having in a relationship and how to fix them, along with providing information about a potential relationship.

Paying attention to the interactions between the planets is essential when determining the compatibility between two people.

For example, connections between the Sun, Mood, Ascendant, Venus or Mars result in a strong attraction between two people, especially between Venus and Mars. However, interactions between these two also tend to cause hardships and difficulties within the relationship.

Interactions between the planets in two birth charts can cause the relationship to be peaceful, rocky or volatile depending on the mix of energies that occurs.

For example, the relationship between the Moon and Mars or Venus provides information about the emotional understanding between two people.

Certain aspects can cause two people to become emotionally distant or conflicting, while others can result in a profound emotional understanding between the two.

Along with the Sun and the Moon, the lesser-known aspects between the planets can have significant effects on the bond between two people.

If you are in search of true love, these eight horoscope sites are the perfect resources to gain a better understanding of your current relationships, along with providing advice for how to find the perfect partner for you.

Finding love is a delicate process that involves being openhearted, resilient, and able to make sacrifices when necessary.

However, in the best relationships, the sacrifices made by each partner are equal, and partners are able to continue on their chosen path of life alongside one another.

If you are hoping to find love, these websites can give you the answers you are searching for and ultimately guide you toward the perfect partner.

This free site provides information about horoscopes, compatibility between partners, and tarot card readings based on the positions of the planets.

It is a wonderful resource for those searching for answers about their future, relationships and current astrological state.

LoveAstro focuses on astrology about marital issues, love problems, familial arguments, education and career. This versatile website can provide useful knowledge about how to proceed in many different areas of life. This website gives users individualized astrological horoscopes and readings for every day, allowing you to better understand the seemingly random events in your daily life and giving you suggestions on how to proceed in certain situations

If you are in search of advice and predictions regarding your love life and relationship status, this is the place to go.

It focuses on Horary astrology, an ancient discipline that attempts to answer questions by creating a horoscope based on the exact time that the astrologer received and understood the question.

This helpful site gives users a free horoscope based on love for the coming month, providing guidance for how to proceed and preparing you for what lies ahead.

This is a great resource for those hoping to find the best horoscope that matches their own. Cafe Astrology is ideal for those looking for a range of astrological information, as it gives yearly, weekly, and daily horoscopes and love sign compatibility reports. It also has a birth chart calculator, which allows you to better understand your love compatibility. Run by a very successful and seasoned astrologer in India, Astrologer Gupta provides you with predictions related to love life and relationship status.

These can be very helpful for those searching for answers about their future love life. This app offers many astrological services, from horoscopes to articles to fashion based on astrological readings. This is a convenient way to get quick information about your astrological sign and your relationships to come.

True love can be as scary and intense as it is beautiful and caring, but with the right partner you can overcome any obstacle.

The best relationships are ones in which two people have profound love and respect for each other that is both passionate and stable. This can be a difficult balance to achieve, as every person comes with his or her own securities and fears.

However, by using the astrology of relationships, you can avoid potential heartbreaks by only pursuing people who are compatible with you astrologically.

The stars hold an incredible amount of information, most of which goes unknown by the people that it affects.

However, those who are willing to open their minds to the possibilities of destiny and star alignment will only benefit from the knowledge and understand that they gain.

By searching for the best horoscope to match your own, you are taking charge of your destiny and utilizing the many resources at your disposal to cultivate a happy, successful relationship.

If you are hoping to find true love, we recommend you to pay attention to the mysterious and powerful forces of astrology, as these can guide you to a long-lasting, loving relationship.